TAR/TAA for Ankle DJD and Deformities

The deterioration of the upper ankle (DJD, degenerative joint disease) is usually a late result of a serious joint injury. In addition to accidents, ankle deterioration is also within the framework of primary osteoarthritis, rheumatoid joint destruction and other systemic diseases or infections. In the past the treatment required a fusion procedure (arthrodesis of the ankle joint) followed by a lengthy healing period and the implementation of orthopedic footwear.

Since 1970 it has been attempted to obtain mobility with an endoprosthetic joint replacement. The initial cemented prostheses were mechanically inadequate and led to premature loosening. Since the mid-eighties the modern uncemented and three-component-model were developed. It was successful as it has a good long-term result and not much bone was removed during the implantation. Since 1999, we have been able to perform successful ankle-endoprosthesis implantation.

Through the further development of the prosthesis there have been improvements in the anchoring in the bone. The more anatomical shape of the components led to better motion possibilities and reduced wear of the poly. Now we have a vast number of prosthetic sizes and diversities, which allows a better implant choice for different patients. A good result can be achieved when it is inserted in selective patients.

Till now minority of the patients have received prostheses. The reason for this is that a restrictive indication for joint replacement occurred. This was a result of the high frequency (80% of the cases) of accompanying deformities in osteoarthritis patients. This was a contraindication to the TAR/TAA; therefore Dr Boack developed the new surgical technique for the one-stage correction of severe deformities and the implantation of the prostheses.

The new technique could treat misalignments up to 40°. This resulted in new possibilities for many patients and the narrow range of indications could be considerably extended. This allows an additional 3-4 patients being successfully treated per a week. Despite the extensive corrective surgery, patients who had minimal invasive surgery could start earlier with physiotherapy and mobilization. Due to rapid pain relief and possibility of immediate treatment after the surgery patients could achieve an increased joint motion. This treatment option has also contributed significantly to the good functional results after correction of the deformity.

Bone defects or malformations could be replaced with a custom made prosthesis, which is specially made for the patient with the assistance of a computer analysis.

All patients, who were operated on with the new technique were re-examined.

Initial situation before the surgery

Preoperative consisted of 81% tibial deformity with an average angulations of 5° (aLDTA by Paley) and additional 87% talar deformity with a misalignment of 8° (tibiotalar tilt). The range of misalignment was between 2 to 41° (!). The selective ankle movement before the operation in the image intensifier measurement in the ankle was an average of 13° (0-25). In a preoperative questionnaire (AOFAS Hindfoot Score [0-100 points, 0 = worst score, 100 = best score]) patients indicated only 29 pt. (0-63).

After corrective surgery and prosthetic implants, a timely healing period could be determined. Since 2002, there have been no registered aseptic loosening of our ankle prostheses. During a follow-up examination it indicated that the AOFAS score was 84 (69-100) points. In the visual analog scale for pain (0-10) the patients stated that their pain intensity was only 2.1. The functional deficit decreased to 2.3 in VAS(pain).

The overall mobility of the ankle averaged at 39°. The activity rate in Tegner Score increased to 3.1 which was the equivalent as in an age-adjusted healthy population without ankle arthritis.

98.2% of patients were satisfied with the surgery and would undergo surgery again. 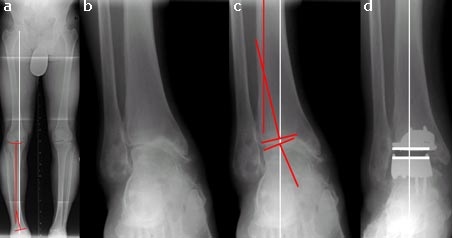 A one-step procedure with deformity correction, release, ligamentous reconstruction and implantation of TAR is technically possible.
In the field of total ankle replacement good and excellent results are achievable, if all deformities are corrected. The success of total ankle arthroplasty depends directly on the experience of the surgeon.

Thereby this TAA technique offers a good alternative to a fusion procedure.

Our service team is looking forward to consulting with you personally and individually. You can reach us via telephone or contact form.